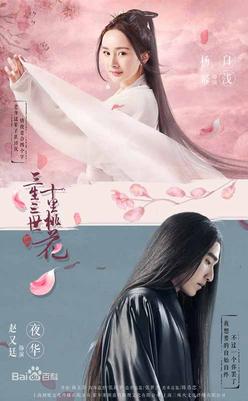 While resting before I dived in to researching and editing my next book, I discovered a popular Chinese drama on Netflix. Its English subtitle is Eternal Love but in Chinese it’s a couplet meaning “Three Life Times / Ten Thousand Miles of Peach Flowers.” What caught my attention, besides the beautiful, otherworldly picture,  was Yang Mi, who I liked in the drama Palace. In the beginning I was not impressed by Mark Chao, because I couldn’t hear what he was mumbling most of the time. I thought I was going to watch for a minute or so but it was a mistake. For the next two weeks I would be glued to the couch in front of the TV! I didn’t enjoy every detail, and skipped some of the unpleasant ones such as jealousy fights, but it was the first time in years when I became so addicted to a TV show.

Looking back, I still don’t know exactly what the magic was. The digitally made pictures of the peach blossoms, traditional mountain-water scenery, and allusion to many well-known Chinese legends certainly played a role.   I liked fox spirit stories as a child, although in those stories, foxes were normally evil seducers. This is actually a story that glorifies them. The romance part is for sure an attraction as well. The taciturn Prince Yehua, who  loves the same woman three life times, wins my heart before winning the fox queen’s. The acting of Yang Mi is great, playing multiple roles, from a carefree young girl to a mature, proud queen.

But I think what really fascinates me is the portrait of the lives of the immortals. They aren’t actually immortals but they live by tens of thousands of years. What makes the show fun to watch is also that the immortals pretty much act as mortals, because they love and hate just like us. The greatest enjoyment of course is to know that the main character, the fox queen is fifteen thousand years old, and she of course looks no more than twenty. I guess I have to confess I haven’t grown up and still like fairy tales. Not everything worked for me, of course, and there were times I laughed at details that didn’t make sense. For example, when the fox queen as a young girl (five thousand years old) arrived late at a dinner, she said to her date, the demon prince, “I’m sorry I’m two hours late.” The demon prince answered, “What does two hours matter? I haven’t seen you for days!” I began to wonder what two hours meant to a goddess who lived by thousands of years.

Another element of the show that interests me is the immortals’ experiments of living in the human world. Being human is repeatedly a trial, or a punishment they have to go through. Often they would live a human role that is opposite of what they are as gods. For example, the Eastern Earth God, who’s incapable of returning love, becomes an emperor on earth, whose heart would be “trampled on” by his favorite concubine. When the mighty, invincible Prince Yehua lives as a human, he has only one arm.   It makes me think perhaps I am an immortal myself, and this life time I’m playing the role of an unsuccessful writer?

Thanks for reading! If you haven’t already seen it, and if you’re interested, here is a link of the show on YouTube: