Love and the Forbidden City was inspired by numerous Qing dynasty time travel books and dramas that I had been addicted to in the past few years. The genre Time Travel in Chinese is Chaoyue, meaning pass through. Since a favorite period is Qing dynasty, a sub-genre is Qingchuan, or pass through to the Qing dynasty. The plots invariably involve an ordinary woman from the twenty first century time-traveling to the eighteenth century, normally during Kangxi’s reign, and falling in love with one or more of his sons. The reason that authors favor that particular period is not just because of the amount of princes available for the protagonist to fall in love with, but also because of their fierce competition for inheriting the throne.

If Qingchuan is new to you and if you’re interested in finding out more, then I would like to make the following recommendations. 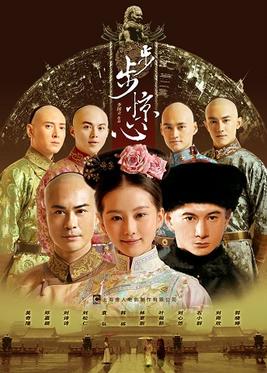 In the story, the protagonist from the 21st century, gets into an fatal accident and when she wakes, she finds herself in the Qing dynasty, in the body of the sister of one of Prince Eight’s concubines. She falls in love with Prince Eight and Prince Four, who are main candidates for the throne. Her new body is undoubtedly beautiful, and since she’s actually from the future, her unusual knowledge and wisdom also dazzle the princes.  Two other princes, the tenth and the fourteenth, also fell for her. It was the first book I read in the genre and my favorite.

The TV show with the title Startling by Each Step is available on viki.com with English subtitles.

#2 宫锁心玉，Palace, is also my my favorite in the genre.

The main character, played by my favorite actress Yang Mi, also wins the hearts of the eighth and the fourth princes in the film, but she will wisely choose the one that truly loves her. Compared with Scarlet Heart, Palace is lighthearted, mainly because the protagonist is more cheerful and fearless. Although it does have obvious plot holes, I find it enjoyable overall.

The show is available on Youtube with English subtitles.